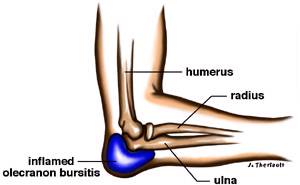 Almost every athlete at one point or another in his or her career will suffer from tendonitis. Tendonitis is a diagnosis, which is often made but less often understood. To fully comprehend what the term means, you must first break down the word tendonitis into its two word basic parts, which are joined together to form the word.

The first word, of course, is tendon. This is the strong band of tissue, which is at the end of the muscle that serves to anchor the muscle onto bone.

The second term is "itis." This is a term, which is attached to a specific word and simply means inflammation. It does not, as is commonly understood, mean infection. The use of the term can change with the piece of anatomy. When it is a tendon, it is tendonitis, but it can also refer to the lining of the abdominal cavity (peritonitis) or the thin lining of the brain or spinal cord (meningitis). 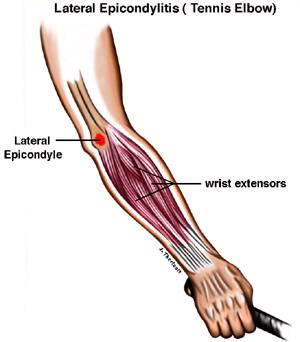 Some sites of the body are much more prone to tendonitis than other sites, and in particular, the elbow and shoulder. Probably the most commonly known form of tendonitis is tennis elbow. This term is a synonym for lateral epicondylitis (see diagram). This is simply the site where all the muscles on the back of an athlete's forearm join together to form one strong tendon which finds its origin onto a small spot just above the elbow joint on the outside of the elbow (lateral spicondyle). When the tendonitis represents an inflammation of this tendon, as it inserts onto this lateral epicondyle of the elbow, it is known as tennis elbow. These strong muscles on the back of the forearm serve to cock the wrist up and back which is, of course, the starting position for the tennis stroke. If this is done repetitively it can cause a tendonitis of this muscular origin at the elbow. Although the common term for this condition is tennis elbow, it can of course be obtained in any sport requiring repetitive motion of these muscles. For that matter, it can also be work related with manual tasks in the work place.

The actual pathology of what is the underlying cause of tendonitis is something, which is debated in orthopedic literature. Some researchers feel that it is a true inflammation of the tendon itself while others feel that it is micro hemorrhages (bleeding) into the fine tissues of the ligament itself. Still other researchers have postulated that it is not the tendon at all but rather an inflammation of the periosteum (outer lining of bone) and is therefore more truly called a periostitis. These arguments are somewhat academic in nature because the end effect to the athletes is the same, pain.

There are many factors that together contribute to the cause of tendonitis. Probably the most common is repetitive overuse of the joint, and you can see how easily this could happen in a racquet sport with the repetitive stroking of the ball with the wrist in the cocked up position. In the racquet sport of tennis itself, it has often been thought that it comes from improper stroke technique in the majority of players. This is particularly true in the backhand. Researchers have broken down the two most common faults into two large categories. Unfortunately, most of us probably fall into the larger group, which represents the category of players who are less than world class athletes. For these players the most common problem is in an overuse syndrome while coming down hard for the overhand serve. The repetitive hyperpronation of the wrist with a vigorous overhead stroke causes recurrent stress on the lateral epicondyle of the elbow. Other common problems are the use of an incorrect grip size on the racquet or a racquet that is the wrong weight for the player's ability.

The symptom patients most often complain of is a diffuse ache around the elbow joint which is usually able to be tracked down to one small local area which is quite tender on palpation. It is particularly worse with active use and usually after the sport the athlete will complain about stiffness and a sensation of swelling, although objectively the swelling is hard to document. Interestingly, if the tendonitis is not on the outside of the elbow but rather the inside of the elbow, this is known as "Golfers' Elbow." The "Golfers' Elbow" or medial epicondylitis is less common than the tennis elbow but just as painful.

The treatment of chronic tendonitis most often begins with simple rest, i.e. cessation of the activity, which has brought on the problem. Most athletes are not comfortable with this as being the only treatment, and they can therefore use certain types of splints, which are worn around the forearm and limit the ability of the forearm muscle contraction. Other forms of non-aggressive treatment consist of phsiotherapy with modalities such as ultrasound and icing the affected area before and after a sport. Non-steroidal anti-inflammatory drugs such as Aspirin, Motrin, and Naprosyn can also be added to the treatment region.

Surgical intervention is another option, but this should be a last resort after all other treatments have failed. Before surgery is contemplated, the area is usually injected with cortisone if the patient has been refractory to all other treatment. Cortisone should not be given repetitively into the same area, however, because it can cause permanent damage to the tendon if it is performed too often. It is, however, for one or two usages a very effective treatment and can often remove the need for surgery. If the patient remains symptomatic or has only a brief period of relief with the injection, then the patient often has to consider a surgical intervention. This usually consists of a release of the common extensor origin of these muscles from the lateral epicondyle and removal of some of the scar tissue in the area. This can be performed as day surgery, and the results are usually excellent.

The risks include infection, damage to nerves and blood vessels, stiffness, recurrence of symptoms, anesthetic problems, etc. Make sure you understand these risks prior to having surgery. It would be better, however, if the whole problem could be avoided completely by simple avoidance. This consists of a reasonable approach to the sport and using proper stroke technique. It is not advisable to pick up a racquet and try to learn how to play tennis, or any other racquet sport, by playing every day non-stop after never having played the sport before. If you do pick up the sport so rapidly, this will almost guarantee an overuse syndrome and tendonitis. The player can also switch to a two-handed backhand, and this will usually relieve most of the elbow problem. Obviously, this is not possible in squash or racquetball.

The best approach to tendonitis is to avoid it in the first place with techniques previously mentioned. If it does occur, however, the best thing to do is to get rid of it as soon as possible because once it has become a chronic tendonitis it can be very difficult indeed to cure. Athletes should seek the advice of a qualified medical doctor who can best advise them and prescribe the appropriate therapy or medication.