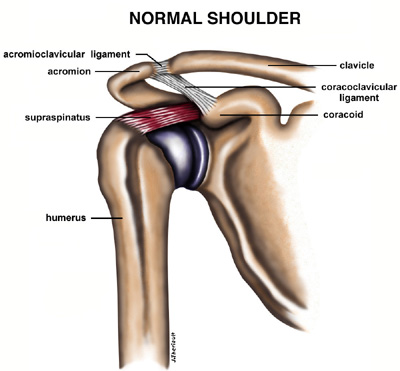 Shoulder instability is the abnormal relationship between the Humeral ball joint and the Glenoid socket such that there is excessive movement between the two and resultant loss of stability. This can be caused by several sources both within the shoulder joint or capsule itself, or outside the joint involving the muscles or bones. This manifest itself either subclinically by: "a feeling of looseness," or loss of momentum and strength in that shoulder.

The classic example is the baseball pitcher who loses the zing in his fastball. Other sports can include tennis serving, kayak paddle control, crew, wrestling and lacrosse. Some sports such as swimming and gymnastics actually benefit from the athletes shoulders being a little "loose."

The most obvious clinical example of shoulder instability is a dislocated shoulder. This has gone full circle from a little looseness, to stretching out the soft tissues so much that the humerus ball joint actually jumps (usually going forward) out of the glenoid socket. When shoulder dislocation occurs in a young individual (age 17-40), the is a very high probability that recurrent dislocations will occur in the future. We will talk primarily about adult instability (age 17 and up), although there is a section at the end on Pediatric Glenohumeral Instability.

The shoulder is best thought of as a universal joint. It has a ball which is actually a cartilage sphere making up 2/3 of the top of the upper arm bone called the Humerus. It articulates with a relatively flat & oval glenoid bone, that is shaped pretty much like the racetrack at the Indy-500 - slight high riding curves at the outer edges. This flat socket is deepened by a lip of soft tissue around the entire glenoid bone called the labrum. Much like the chain-linked fence at Indy-500 deepens the racetrack to keep the cars on the track, the labrum serves to keep the ball of the humerus within the joint.

This Glenoid-labral complex functions further like the suction cup you attach to your glass window, by maintaining a negative pressure within the shoulder joint to keep their humeral ball located. Due to the flatness of the glenoid component, this makes the shoulder the most movable joint of the entire body. Freed of a matching socket for the humeral ball, such as in the hip (ball & socket joint), or a mortise to cradle the humeral head like in the ankle (hinged joint), the shoulder can achieve remarkable ranges of motion unmatched anywhere else in the body. This system makes up the static stabilizers of the shoulder joint.

The shoulder joint is actually contained with a capsule. This capsule functions like a balloon surrounding the Humeral ball and glenoid socket to keep the lubricating fluid where it needs to work. There are several regions within the capsule where it is thickened, to serve as addition restraints to the ball sliding out of the joint, dependent on the position of the arm. These ligaments are dynamic stabilizers of the shoulder joint. They move and are called to function with arm movement.

Several muscles surround the shoulder joint. Four muscles in particular come from the chest wall and back to converge on the Humeral ball. These are the rotator cuff muscles.  These muscles - the subscapularis, supraspinatus, infraspinatus, and terrs minor - make up the muscle stabilizers of the shoulder joint. They control a wide variety of shoulder motion including internal rotation (scratching your lower back), external rotation (opening a door), and forward flexion (reaching up). Several other important muscles make up the outer layer of shoulder stabilizers including the deltoid, pectoralis major, Latissimus dorsi, and the long head of the biceps muscle. The biceps muscle deserves special recognition, as parts of it involve all layers, and it can function as a static, dynamic, or muscle stabilizer of the shoulder depending on position of the shoulder. The anchor of the Biceps-long head is on the 12 o'clock position of the glenoid bone within the joint capsule. It then traverses over the top of the ball of the humerus where it functions to depress or hold down the ball from traveling upward and banging into the acromion or roof of the shoulder joint. As the biceps enter a small groove in the humeral head it prevents forward migration of the ball external to the shoulder joint proper. The biceps also deserves honorable mention as the usual source of shoulder pain which also radiates down the upper arm, and even sometimes involves the elbow.

Shoulder instability is failure of one or more of the stabilizing systems of the shoulder. The static stabilizers can fail throughout a traumatic labral tear of either the anterior (Bankart lesion), posterior or superior (SLAP lesion) portion of the labrum. This is usually associated with a dislocation where the arm is flung violently upward and backward (the windup phase of throwing). This can be seen when a basketball player going up for an overhead shot is stuffed by a blocker. Loss of the anterior or superior bumper allows the humeral ball to slide forward on the flat glenoid bone.

Failure of the dynamic stabilizers, namely the anterior inferior glenohumeral ligament is though to contribute to recurrent positional instability - "It bothers me only when I throw." These ligaments are probably torn or stretched at the time of the initial injury. They no longer function as a check-rein to prevent the humeral ball from sliding forward, hence recurrent instability develops. Failure of the muscle stabilizers is more complex. Causes of muscle stabilizer failure are numerous and can include inflammation (tendonitis), irritation (impingement), nerve injury due to trauma or ganglion, or rotator cuff tear.

A wide range of histories can be seen with instability. Usually the common denominator is a history of traumatic shoulder event that either resulted in a dislocation, or subluxation. Subluxation is the partial sliding out of the humeral ball out of the socket, such that it can easily slide back into socket with moving the arm.

Shoulder instability has been historically classified as either traumatic or atraumatic. Traumatic instability is associated with an initially normal shoulder that incurs a traumatic event that causes the shoulder to dislocate or sublux in one direction (usually anterior-inferiorly) and is almost always associated with failure of the static and dynamic stabilizers of the shoulder. There is a very high incidence of re-dislocation and recurrent instability in this group. While the first event that causes dislocation is remarkable, subsequent events are less dramatic. One patient was simply putting his arm up to place his hand behind the pillow his head was on while watching a hockey game.

Atraumatic instability is usually a systemic problem. Other joints in the body are usually loose (double jointed) as well. There may be a family history of this generalized ligamentous laxity. The patient usually has looseness in all planes of glenohumeral shoulder motion which is known as multi-directional instability of the shoulder. Sometimes these patients can make their shoulder joints pop out of place at will. There is usually no history of a traumatic events starting the process. There is a high degree of seeing looseness in both shoulders. This is usually a results of the atraumatic decompensation of the muscle stabilizing group with abnormally elastic collagen within the static labrum and dynamic capsiuler ligaments. Some folks divide these groups up into simply the "torn loose" and the "born loose."

Examination of the shoulder is best accomplished by exposing the entire shoulder. Wearing Tank tops assist the examiner in getting maximal benefit of the exam. It is important to assess the degree of instability. Either frank dislocation, subluxation, or apprehension can characterize recurrent instability.

Apprehension refers to the fear that the shoulder may dislocate in certain positions. This usually restricts maximal performance at a sport. The range of motion of the shoulder joint will be compared with the opposite non-involved side. Localized tenderness along the anterior glenoid rim will be sought if a labral tear is suspected. The muscles of the rotator cuff will be tested against resistance.

The apprehension test will usually be positive in patients with recurrent instability. Other special maneuvers performed by the examiner on the shoulder include the sulcus test, drawer test, push-pull test, and the fulcrum test. Finally a close assessment of the neurolgic structures will be evaluated to insure no nerve compromise.

Many times a confirmatory test will be ordered. These include x-rays of the shoulder which is important with a history of traumatic instability. An MRI is a special machine that defines the soft tissue and bony anatomy rather precisely. Sometimes it may be necessary to add a special magnetic dye to the shoulder joint called gadolinium to view a MRI-Anthrogram. This aids in defining tears of the glenoid labrum. The drawback to MRI's is that they are performed with the arms at your side. Not in the provocative position which causes the feeling of instability. As with all special tests, they can assist in the diagnosis, but do not take the place of a well performed physical exam & history.

Other problems may mimic instability and are contained in the list of "other" diagnoses which may be considered, the so-called differential diagnosis list. Luckily for instability, this list is rather short and usually can be distinguished by physical exam or x-ray. Soft tissue interposition, scapular winging due to nerve palsy, seizure disorder, or electrical shock, causing violent muscle contraction with possible dislocation, tumor, and unrecognized fractures are a few causes of instability.