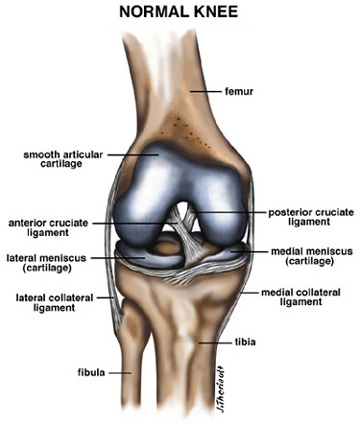 Many activities place repetitive stress on the legs, more specifically the knees. Knees are extremely vulnerable to overuse injuries as well as acute injuries from stresses brought against them. When a young patient presents with generalized or anterior knee pain, and there aren't any definitive abnormalities after examination, OCD should be considered.

Osteochondritis Dissecans (OCD) is a condition in which a section of articular cartilage and its underlying bone slowly separates from the surrounding bone. This condition is painful and can do significant damage to the undersurface of the knee. The pain intensifies when the bone separates because at this time you have bone floating around the knee, and in and out of the joint space.

The usual suspects of OCD are adolescents to young adults, and men are more likely then women to have OCD. The affected site is usually the medial femoral condyle. About half of the time, patients present with some sort of trauma in the recent history. Patients may present with swelling , locking, or pain to additional sites. There's usually limitation with movements and flexibility, also nearly always there is some quadriceps atrophy.

A good test to reveal OCD is Wilson's Test, where the knee is flexed to 90 degrees and the tibia is rotated internally and then the knee is extended. Pain can usually be seen at about 70 degrees of flexion around the medial femoral condyle. Sometimes patients have deformities of the knee, such as genu valgum (knock-knees), or genu varum (bow-leg).

If a patient's findings include the following: joint swelling, diminished thigh girth, or a positive Wilson's Test, then additional study is indicated. Usually radiographic study is the next in line to try and solve the problem. The specific x-ray that usually can locate signs of OCD are the Tunnel View x- rays because they best show the intercondylar notch, which is the region of most OCD lesions. Other tests that can be helpful are MRI'S, Arthroscopy's, and Arthrography's.

If the problem is recognized and diagnosed early then immobilization by cast or soft knee immobilizer may be the prescribed treatment, along with 4 to 6 weeks of rest including little or no weight bearing. The leg can be casted in a way which protects tibiofemoral contact for protection. Once x-rays show good position and healing, the doctor will allow more activity to proceed. The younger the patient, and the shorter the duration of symptoms, the more satisfactory the healing will be. In the older patient, or the more chronic the lesion, surgery is often the treatment of choice. If there's a loose bone in the knee surgery is a definite to get it out of the knee. For the lesion which is still attached there are a few alternatives available, such as curettage and drilling, simple drilling, and pinning in place what's left. Sometimes the surgery can be done arthroscopically, but regardless of the surgical method, cast immobilization for up to 8 weeks will be necessary. If pins are used during the operation, then a second operation will be later performed to remove the pins.

Older people tend to have lots more trouble than young folks with this condition, but if the lesion is treated early enough, then people do very well. The problem with older folks is that they sometimes already have degenerative joint changes before surgery. With younger, skeletally mature people, the outcome is often a lot better. The overall prognosis is generally good to excellent, depending on the size of the lesion and early detection.