So what happens when a weekend warrior gets sidelined with an injury? 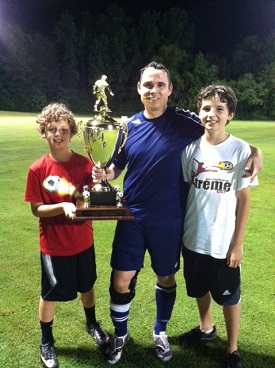 That was the question Shannon Mallory was asking when he was injured playing soccer in November 2012. Shannon is a right mid-fielder for a team in an adult soccer league. He was injured in a game when he collided with an opponent as both were going for the ball. He heard a "pop" in his knee. The collision of the two players tore ligaments in Shannon's knee and dislocated his kneecap. After an MRI confirmed the ACL and MCL Acute tears, Shannon met with Dr. Kuczmanski. ACL Reconstruction Surgery was performed to repair the ligament. His MCL healed on its own.

After only a few months of recovery, rest, home therapy, and physical therapy, Shannon was back on the soccer field in time for his team to play in the playoffs. In June 2013, just 6 ½ months after the injury, Shannon made the "golden goal" in the first overtime to win the championship game! "We have Dr. Kuczmanski to thank for that," says Shannon's wife, Kelly. "If it wasn't for Dr. Kuczmanski's expertise in his office and the operating room, Shannon would not have been able to play soccer again, much less in the championship game."

As an athlete, you put it all on the line each day - training, skill and dedication. At times, these athletes do get injured. Dr. Kuczmanski states "that in order for these injuries to heal, the athlete must put the same training and dedication that are required to perform their sport, back into their recovery." It is with these same characteristics that Pinnacle puts it all on the line for you, ensuring that you continue to play the sport you love and keeping you at the top of your game.

"If it wasn't for Dr. Kuczmanski's expertise in his office and the operating room, Shannon would not have been able to play soccer again, much less in the championship game."